The game looks absolutely gorgeous, but the shooting was a little bit wonky. But still its an awesome game

The project definitely isn't polished, but it's a uni final project, so that's understandable. :D

But the idea is really nice, as well as the concept. The devs definitely combined film and game together to make something quite fun here.

The only part that isn't fun though, is the combat. It's buggy and shooting in a 2D way in a 3D environment doesn't work all that well, considering that you have to move on the Z axis to be able to shoot your enemies, not knowing when they will shoot. Thus the combat is a bit unfait.

Great job though, do play it.

Thanks for the feedback!

Interesting idea, well executed, good graphics. Those are the things I think this game does best. A longer and more refined version would be great. The only Issue I have with it is the gun-combat.

When running the game it first ran really slow. Restarted it and for some reason it ran faster, still slow, but fast enough to do things. Kept running into black screens. But the biggest one is when leaving the office. Black screen when trying to go outside. Not sure if the game is still running and i cant see it or it froze. Had to force quit.

But really loving the look of the game. Looking forward to actually playing the game. keep up the good work. hope the bugs can be worked out.

I like the game. Keep up the good work!

I am not a gamer. Last time I ever really played computer games for probably decades ago. Yet I downloaded and played the game just based on the trailer you posted on reddit.com/r/pixelart a few weeks ago.

WOW, this game's art was absolutely stunning! I was so immersed in the environment and the game has such a great vibe/music. It was a delight to play or even just sit back and watch.

This means a lot to me! Really Glad that you enjoyed it. This game was made for a chill experience and for the player to be immersed in the environment!

This is the best game I have played this year! Please continue or create a game with the same mechanics, I thought it was a little fun game but it was so much more! PURE TALENT!!!!!

It has been a LOOOOONG time since I've played a great game like this with this kind of astmosphere... A mix of 2.5D, plus Godrays is AMAZING!

I happened to stumble upon this gem by chance. Boy what an experience. I don't play games that much lately but I honestly find it hard to remember a game with an atmosphere so rich as this one. Really, the looks, the soundtrack, it all just fits so well together.

I would love to see some more adventuring and perhaps a bit less of fighting even though death was not punishing. I hope to see more like this or this one developed further :)

I’m Glad you enjoyed what I wanted to depict. Will take note on the feedback and stay tuned!

The game launches ok but the character constantly walks toward the camera. It's like the down arrow is constantly stuck on. Pressing up (or W) makes him walk away, and Shift works to start running, but I can't move left or right :(

Very strange. Could you do a restart and try again to see if that button stuck issue is fixed?

I downloaded the windows version and experienced a weird glitch where the game starts up with a white screen that looks like a bright light is being shined on the character. I can play the game and tell that the character is moving since it gave me a prompt to pick up the time device but I cannot see anything. I tried downloading it multiple times and had the same issue.

Sorry to hear this. I am still looking into a fix for this.

Most of  windows users work fine. I have a feeling it has to do with the graphics card.

Oh, that's *really* weird - I'd restarted once and it didn't help, but a second restart got it working! And I'm glad it did - what a wonderful game :) Thank you!

Great game! concept is really good. Sometimes I couldn't see the player though, which was not great. Combat felt weird, but not bad.

Thanks for the feedback, will see to that in future projects.

it was a great game btw, I really liked the style

Loved the Visual Art Style and Core Concept of the game! I too made a video on it but none the less this was a fantastic experience from start to finish.

Thanks for playing the game ;)

This game looks amazing! i like how you took the concept from In Time and turned it into a video game! this was an awesome game to play i can't wait to see what else you create! also i did a lets play on this game here is the video i hope you enjoy!

Thanks for playing the game! The letterboxes seems to not appear correctly in your video. Can I check what is your resolution?

This game was very creative!

It was a great game to play and record!

Hello! I really liked your game, it has some nice aesthetics and it captures the "Noir" feel. I was curious what kind of engine do you use? I was planning to make a pixel game. Please reply ASAP, Ty. :)

It was made in Unity!

Thanks for that game loved everything in it, from the art to the music and all those little easteregg from the 20'! My video isn't good enough for the game but it's a start :)

Arch Linux user here. Yeah, so, the game crashes with a SIGSEGV when trying to leave the office, 100% of the time.

Unfortunately there are some unknown conflicts for certain Linux OS. I would recommend playing on another OS (if possible) as of now!

Yeah I ended up just using the windows version through wine, which worked fine.

This game was truly a masterpiece, I absolutely adored the art style and the feeling it brought on. In all honestly I did not understand the ending, but I felt it could be significant. Looking forward to (hopefully) more work from you, Christopher. :)

Really glad the game made you feel that way. Stay tuned!

Your game looks so good.I'd love to see another one but like 3 hours long atleast

Thanks for playing! We shall see...

loved it so much cant wait to see more from you.

Thanks for the gameplay video! Hope you enjoyed it.

Really enjoyed TimeOut. The art style is so distinctive and the world you have created really evocative. Hope to see more from you in the future. Got a copywrite claim on YouTube...as expected :)

Thanks for playing, will get the claims sorted :)

ABSOLUTELY LOVED IT!!! Woooow!!! Definitely reminds me of a dystopian kind of world caught between the future and past. GREAT GAME and I hope to see more of this or more projects like this!!! I hope you enjoy my gameplay

I definitely enjoyed your gameplay. 10/10!

10/10 I loved it. Beautiful art style, fluid gameplay, i'm just a little confused with the ending.

Thanks for the compliment, really appreciate it! I leave that up to you to think about it.

Ah, so you're the cryptic type. hmmm.

Will there be more to this game? I love it. I wanna know more of the story!

For now it's a completed game. Stay tuned!

Awesome game! I love noir and pixel art so this checked all my boxes. Can't wait for more!

Thanks for playing the game!

I'm not sure if anyone else has this problem, I try to open TimOut.exe it only shows the Unity title screen and then it disappears and the in game cursor, it waits a couple seconds then a mini window opens saying, "TimeOut - Unity 2019.2.3f1_8... (and a couple of other characters). I tried opening the Crash Handler but nothing happens. Please help.

Could you post the error log here? Can you also check if you have at least 6GB of RAM? 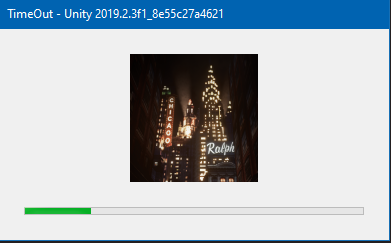 I have 8gb of RAM

I'm playing it on Ubuntu Linux. When I toggled the V-sync, the screen went dark and, only, the dialogues were visible on the screen.

That seems to be an issue for VSync. Does the game work fine if Vsync is off?

It works fine, when Vsync is off. But the game needs to be restarted after turning the Vsync off.

Also, when the game is paused in Ubuntu, the dialogues and the voices do not seem to stop at some instances.

These are the problems that I've encountered so far.

Absolutely LOVED this whole experience, the environment, art style, and Bioshock vibes. A warning for people on YT; some of the music will get flagged for copy-rite use, so be aware :)

Thanks for letting me know, will get the claims released asap! Thanks for playing :)

no problem!! And I think they fell off a little earlier today. Not sure if that was you, but thanks if it was! Really loved this little project :)

For Linux (I use Linux Mint):

Bare minimum should be 6GB RAM (take it with a grain of salt), otherwise the game will either refuse to run or not run at all

Such an amazing experience. Loved it! I can't emphasise how much I was taken into the atmosphere. It's insane. Great sound design as well.

Hey Dev, I love this game, the graphics are fantastic, and the story is very intriguing! I included you in my video for the best indie games I played this week and have a game play video coming out later! Check it out

Thanks for the feature! Hope you enjoyed the game.

Amazing games, can you tell me about your process of making the characters? What program did you use? It doesn't look like a normal 3d animated model